Back to more fun stuff

A new golf course was built in Florida. The golf course was built over some existing marshes, which in Florida requires the builder of the course to create more marshlands somewhere else. These newly created marshlands, called mitigation areas (mitigating, or making up for the loss of wetlands), are required to be monitored twice a year to see that they are created correctly and that the newly created wetland is growing and progressing toward offering the same ecological function as the wetlands that were destroyed. This monitoring is conducted by qualified wetland biologists.

At nine of the ten marshland mitigation areas of this golf course, the wetland biologist finds good growth and progression toward the goal of reaching the same ecological function. Marsh grasses are growing and there is good coverage of plants, and animals like crabs and herons can be seen. However, in the 10th area, there is only one plant visible, no animals, and it is not clear why. The wetland biologist must determine what the problem is and solve it to get the marshland mitigation area to grow and function like the others. 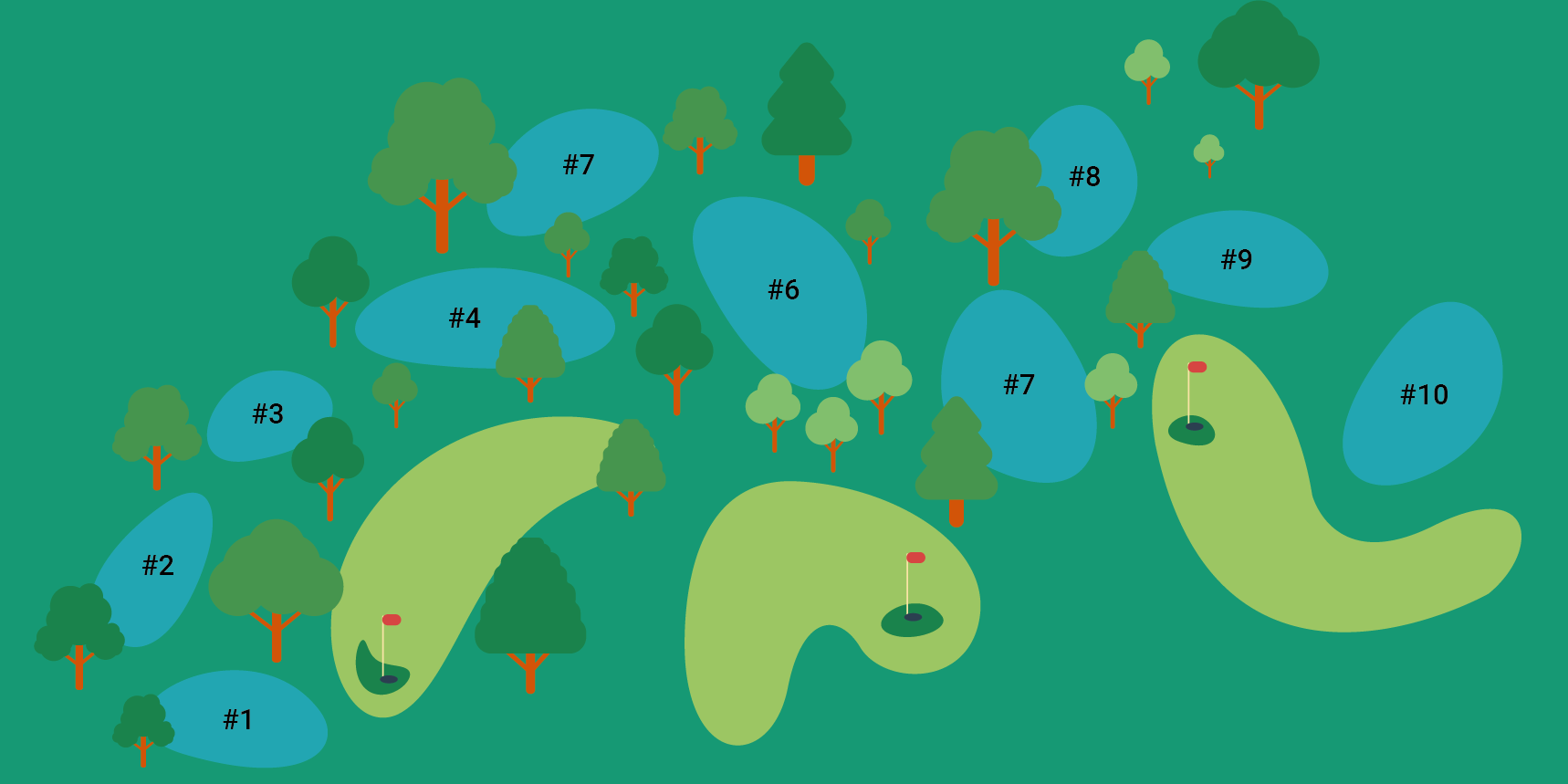 What is Wetland Biology?

Wetland biology is a growing area within the fields of biology and the biological sciences. Biology is the study of all life – plant and animal – and how they react with their environment. Wetland biology is about the relationship between a wetland environment and the plant and animal life that lives there. They are often called upon to determine how healthy and ecologically functional certain wetlands are. They can be called upon to test water and soil, conduct surveys of animal and plant life, or conduct formal monitoring over time. Formal monitoring involves establishing permanent, fixed locations in which to assess the percent coverage of certain plants. Formal monitoring involves taking photos, generating charts and graphs and comparing the growth or health of the area over time. Informal monitoring might involve a simple check to see if the area is alive and determining if the area is relatively healthy, given age and circumstances surrounding the area.

Please answer this question on your Wetlands Activity Sheet.

Which two of the following items will the wetland biologist most likely check, in order to solve the mystery?

The wetland biologist reviewed the weather reports for the past two weeks prior to the monitoring date. For most dates, it was sunny, hot, humid with afternoon thundershowers dropping ¼ to ¾ inch of rain. There were only two days that it did not rain in the afternoon.

The area could have been impacted by someone illegally dumping chemicals, trash or other things into the water. Dumping is a problem in Florida, with many natural wetlands impacted and even killed by this illegal activity. The images below are typical when dumping has occurred in or near a wetland.

Usually with dumping, you see tire tracks leading to the wetland and also barrels, boxes or bags thrown into the water or around the area. The wetland biologist did not note any of these signs in Mitigation Area 10.

The plant on the right is seen in mitigation area 10

Found in marshes along both east and west US coasts. Very common plant.

Less common that cordgrass, but still fairly common saltmarsh species, usually living in areas that are not submerged deeply.

Common marsh plant found around the edges of marshes where they trend toward sand and dunes.

Common freshwater pond plant. Has white flowers in the spring.

Common freshwater pond plant, related to the hyacinth that clogs waterways all over Florida. However, this plant doesn’t take over everything and has good ecological value. Has purple flower in spring.

Grows in up to four feet of fresh water, produces a round, yellow flower in spring. Leaves can float on the surface of the water like lotus leaves, or stick out of the water as shown here.

There is water in Mitigation Area 10. Water testing can give a wide variety of information and can indicate if a pond is polluted, is being impacted by fertilizer or is suffering from a lack of oxygen.

The table in the 2nd, 3rd, and 4th columns represents the data for each type of water (ocean water, brackish water, and fresh water). The data in the fifth column is data collected and recorded for area 10.

Run off occurs when fertilizer from crops, golf courses or lawns is carried into ponds, lakes and streams when rain water ‘runs off’ the grass or field. Run off can cause waterway to become ‘eutrophic’ or die from excess nutrients. This process usually involves ‘green water’ or water that has a lot of algae and excess plant growth. The images below are all examples of water impacted by run off.

There could be a biological reason for the mitigation area to die off. These include things like a significant overgrowth of snails that damage the plants, opening them up to infection by a fungus. Or a disease of cordgrass that could kill off most of the plants seen in the mitigation area. These types of biological impacts can often be identified by the appearance of the area.

Overgrowth of snails that lead to fungus 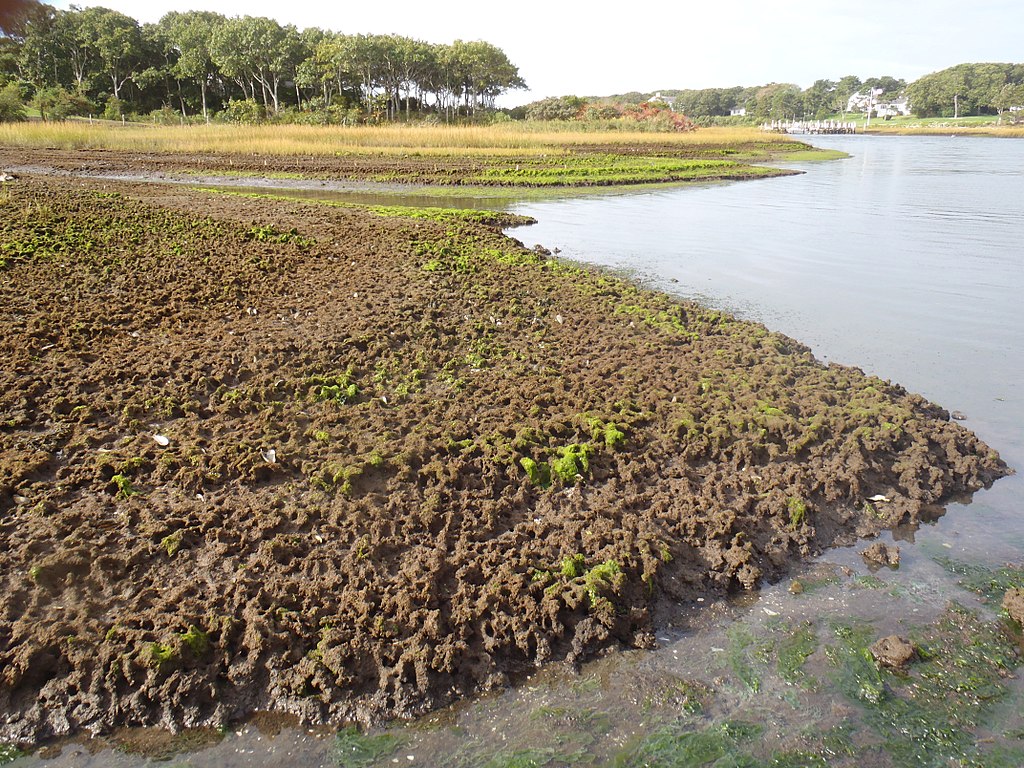 Saltmarsh die off due to disease

After exploring the information above and recording data you think is important on your worksheet, please consider what the next steps will be to solve the problem. Knowing what the problem is constitutes the first step. What second and third steps do you think the wetland biologist should take to bring this mitigation area back to life?

Marsh found along rivers, coasts and estuaries which floods and drains by the tidal movement of the adjacent estuary, sea or ocean.

The action of reducing the severity, seriousness, or painfulness of something. In this case, the mitigation areas being monitored exist to reduce the ecological severity of building a golf course in an area with salt water marshes by creating new marshes.

Interfere with something causing damage or unauthorized changes.

The arrangement of the natural and artificial physical features of an area.